One of the recurrent things in the news at the moment is the Northern Ireland border issue and whilst I am not going to go into any detail, I did see the cartoon below which I thought was quite apt and gave me a chuckle! 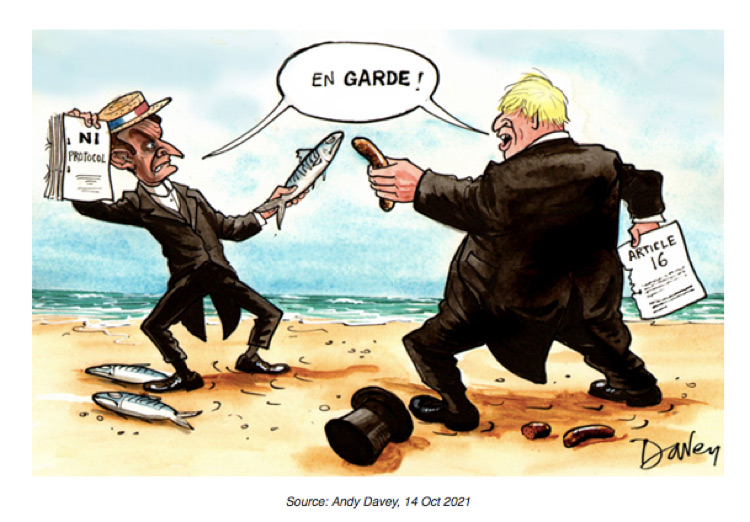 What do we mean when we refer to a portfolio of investments?

Whilst I try to avoid jargon as much as possible, one description we often use is to refer to portfolios which are either managed as a model within a certain risk profile or on a bespoke basis, tailored to each individual.

In both cases, the processes have some common elements used when putting a portfolio together. There are three key elements that are typically taken into account. This first is to consider an appropriate asset allocation to determine how much should be held in stock market related investments which are referred to as Equities and how much should be in other sectors like Government issued debt - more commonly called Gilts in the UK and Treasury Stocks in the US - often referred to collectively as Bonds or Fixed Interest investments. Then there are alternative investments like commodities, which would include things like physical gold as one example.

The second key consideration is geography; we live in a global world and investments need to reflect this if they are to gain access to the whole market and associated opportunities.

The last area is currency - even though you may live in a single currency area, there are further opportunities to use other currencies as part of the overall strategy.

The “doughnuts” below are examples of these three elements and are actually taken from my ISA, which has a moderately adventurous strategy. This is why you will see that the equity content is quite high at 76%. A medium risk portfolio would typically have around 50% in Equities.

By creating a well-structured portfolio, based on comprehensive research, the levels of risk can be managed accordingly.

The main test though is performance. The theory is all very sound, but the individual stock and fund selection will be the acid test as to whether it will perform and preferably, outperform the markets. To measure this, each portfolio will have a benchmark to measure against. The benchmark will typically be an independent industry based index that most closely resembles the investment risk level and objectives of the portfolio. The graphs below are once again for my ISA showing the actual performance over the last 3 years. As you can see, my portfolio has a healthy margin over the bench mark which I am very happy with.

In the next newsletter, I will look in a bit more detail at the individual content of portfolios and how the risk levels are determined and controlled.

An update on our travels.

At the time of writing, we are on Vancouver Island, having landed a week ago in Calgary. We took a few days to drive up what is known as Icefields Parkway and tracks up through the Canadian Rockies for nearly 200 miles. Apparently, this is in the top ten of the world’s best road trips, but unfortunately, even having completed it, it’s impossible for us to say, because most of it was low cloud, which turned into an intense snowstorm and we found ourselves in 8 inches of snow, helping to push stranded vehicles out the way, so that those with all-weather tyres on their vehicles (like us thankfully) could get through.

Chris was talking to one of the other drivers, who proudly said that his other car had winter tyres on, but not the one he was driving - her comment - ‘a fat lot of good that is then’ which clearly helped the situation!

That evening in Jasper, we decided to have a walk through the town before supper, and were treated to the sight of a family of 3 black bears up a tree in somebodies front garden!

However, the next day, we were treated again with some spectacular scenery with the fresh snow adding to the vista.

We took a drive through one of the local parks and were had more wildlife sightings including a close encounter with several moose, who are supposedly shy creatures, but not always!

The bull moose below was particularly bold and not only did he come right up to the car, but took pleasure in licking it and we can only assume that he was attracted by the salt deposits on the side! You can see him in the pictures below and can see how close he got! 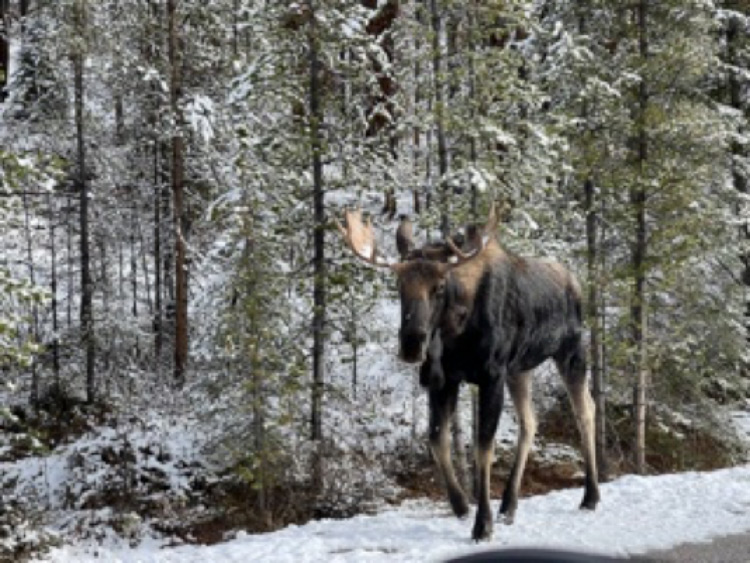 Fortunately, Chris managed to close her window just in time, otherwise she might have got licked too! 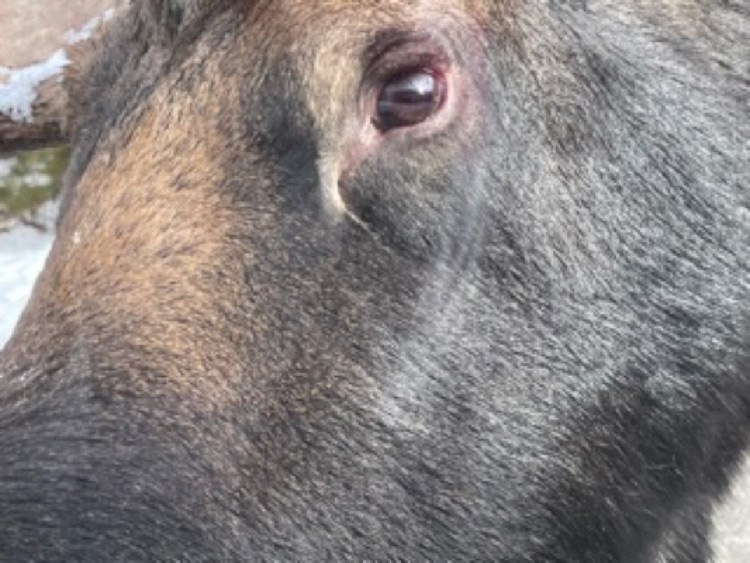 On our last night in Jasper, when leaving the restaurant to walk back to our hotel, we were warned to be careful as a wild bull elk had been spotted in the town and as it was rutting season, he could be unpredictable! By comparison to wildlife at home, it makes squirrels and foxes look comparatively tame!

For the next week, we will be self isolating, prior to our attempt to fly to the US next weekend and we can bring you up to date in the next newsletter.