I hope that you and your family are well and managing to keep in touch utilising technology - it’s hard to imagine how much more challenging life would be without it!

Although we are starting to see the early signs of a reduction in the rate of virus-related deaths in various countries, it is of course, far too soon to get complacent about the measures that are being taken to help inhibit the spread of the virus.

As always, there are a small minority of people who will break the rules and indeed, there have been some high profile incidences, but in the main, I get the impression that people are following the guidance and hopefully, over the next week or two, we will start to see the impact of this with numbers of new cases and deaths continuing to fall.

Certainly this week, Stock Markets have reacted positively to this news and at the time of writing these notes on Tuesday morning, all the Indices are in the green, which is a rarity in itself.

I have been asked by a few people about comparative information and when I refer to history showing that Stock Markets have a habit of being cyclical and recovering and whether I can demonstrate this in pictorial form.

Having had a think about this, I think the best way to demonstrate this is to use a graph, which is actually based on the UK Financial Times 100 Share Index, which is the index of the 100 largest Companies on the UK Stock Exchange. 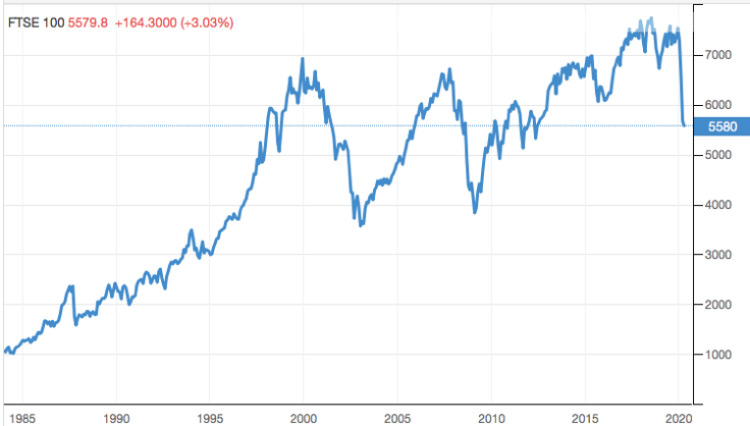 If you look at the dates at the bottom of the graph, you can see that there was a large drop in market value in the early part of the graph and this was actually the Stock Market crash of 1987.  It became known as Black Monday, when on 19th October 1987, the majority of world Stock Markets dropped drastically, with a 20% reduction being recorded in the US in one day and a 22% reduction in the UK over 2 days.  What you can then see from the graph, is that it took 2 – 3 years to recover, but thereafter, significant gains were made right the way through until the early 2000s, when we saw the technology bubble burst and the resulting Stock Market falls that continued through to early 2003. Then they reversed fortune again and that was known as ‘the Baghdad Bounce’.  This followed the military victory in the Middle East.   The next big dip on the graph, then came in 2008 with the financial meltdown.

As you can see, there are many ups and downs along the way as well, but I am just picking out some of the major ones. Going back to 1987, by comparison to now, the year to date fall in the US is around 21% and in the UK around 24%, so not dissimilar to the 1987 position.  As dramatic as this feels at the time, you can see that over the medium to longer term, history shows, the market does recover and continue on a general upwards trend and the once dramatic event, becomes little more than another ‘blip’ on the graph!

I think I would also like close by saying a big thank you to the health care workers and the front line staff who are working so hard to treat those with the virus and keeping all of the supply chains going as far as possible.  I think these people are demonstrating bravery, dedication and kindness and there is a true sense of camaraderie that we are starting to see.   To quote Aesop of ancient Greek fable fame, ‘No act of kindness, however small, is wasted.’

Stay safe and we will pull through this together.