Issue 19 - Really Ahead Of Their Time & Lockdown Fines Gone Mad!

Let me start with an apology as I appreciate we are a day late this week with our News and Views, which is partly due to it being a Bank Holiday on Monday in the UK, thus giving us a short week, combined with preparing to go away on holiday at the weekend, we have been unusually busy.

In our last news letter, I was telling you about Mr Pike, our local grocer and his home deliveries, some 50 odd years ago and saying how I thought that maybe he was ahead of his time.  I was then reminded by the family, that my Grandmother’s cousin and her husband were actually even more ahead of the game, as they opened what would have been one of the very first self-service grocery stores in the UK in 1954, which was based in Rye in East Sussex.

Not only did they have the innovation of self-service at a time, when Sainsburys was still serving at the counter and shaping butter with wooden ‘paddles’, but they also had one of the first, if not the first, automatic change tills supplied by NCR.  In fact, NCR sent a representative over from the US for the occasion and took the attached photographs to record the events.

I thought I would share this story and the pictures with you and hope that it may be of interest. 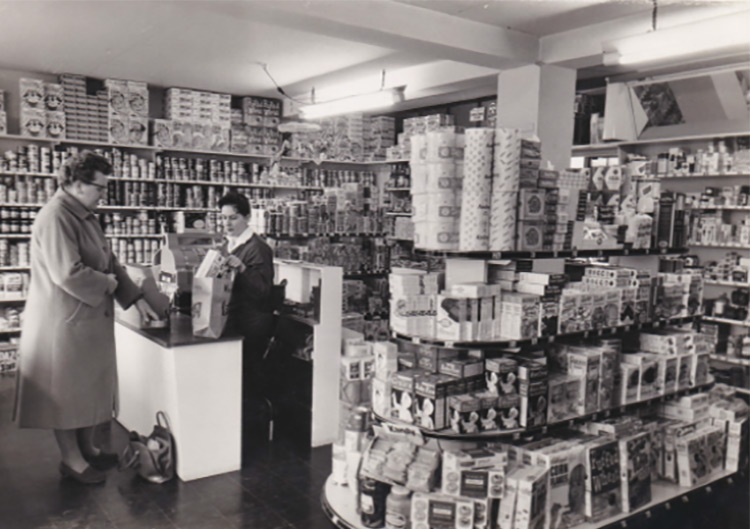 Sticking with groceries for a moment, just when you thought the world could not get any more bizarre, along comes the story  of Lydia Farrell, a 33 year old nurse, who was fined £150 for ‘fly-tipping’ by her local Council – her heinous crime was leaving free apples outside her house for passers-by to help themselves to! 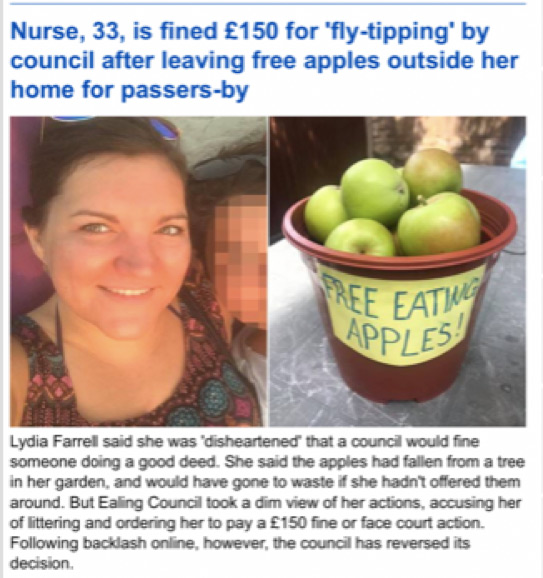 As you will see from the footnote to the article, Ealing Council eventually backed down, but I doubt that it was with a good grace!  It does beg the question, of how dangerous it is to give a little power to small minded people!

Continuing the theme of apples, I was quite interested to read earlier this week that the value of Apple Inc., had not only reached a point where it was the most valuable business ever globally, but it was in fact, worth more that the 100 largest Companies in the UK that make up the Financial Times 100 Share Index.  Mind you, with a 5%+ fall in their stock value today, that may not still be true.

So what’s been going on in the markets?  At the risk of sounding repetitive if not boring, the volatility appears to go on!  With a downturn in markets today, I am reminded of the old saying that when the US sneezes, the rest of the world catches a cold.  Over recent weeks and months, the high tech stocks, including Apple, have been pushing the US markets to record highs.  It’s perhaps no surprise that there comes a point in time, where investors decide to take profits by ‘cashing in some of their chips’ and that is largely what we are seeing in high tech stocks today, but they form such a major part of the value of the Index, that the negativity becomes contagious.

As you will have heard me say in the past, markets don’t like uncertainty and whilst globally the uncertainty of Covid-19 is becoming more familiar and therefore less of a direct problem to markets, the economic fall-out is something that is only unwinding now and in itself, creates further uncertainty.  Whilst many of the numbers are down, they are perhaps, not as far down as expected, which in itself has its positive aspects.

Two of the uncertainties that will be out of the way in the next three months or so are the terms of Britain’s exit from the EU and the results of the US Presidential Election, which I would venture to suggest may well create a more certain time for markets at the back end of this year and as we go into 2021.

Sooner or later, we will move into more positive territory and the entrepreneurs and innovative people will thrive again for the benefit of us all and to quote JF Kennedy ‘A man may die, nations may rise and fall, but an idea lives on.’

As always, stay safe and be vigilant.

With our best wishes