I had hoped that as the lockdown measures start to be eased that we would gain clarity rather than see uncertainty extended, but I cannot help thinking that announcements in the last few days have been anything but clear. Sir Keir Starmer, Leader of the Opposition in the UK has today suggested that Boris Johnson needs to “get a grip of Britain’s Covid crisis or risk a second wave” and accuses him of “winging it” over the lockdown rules.

Whilst I normally try to avoid the politics, on this occasion I tend to agree with these comments. Why for example, does the UK continue to insist on social distancing of 2 meters when the World Health Organisation recommends 1 meter – even former Chancellor, Norman Lamont, had quite a lot to say about this very subject at the weekend.

And with the travel quarantine rules coming into effect on June 8th, which require most travellers arriving in the UK to go into 14 days self-isolation, (which has already been flagged as being unenforceable), I cannot help but ask questions! Why now, when since lockdown on 23rd March, there have been no controls? Surely if this approach was to be effective, we have already missed that particular boat. Perhaps it is all about passenger numbers and how they may increase. Afterall, the CEO of Heathrow airport stated this morning that average passenger numbers are currently 3,000 per day compared to this time of year it would normally be around 120,000 per day.

Similarly, the argument in favour of “air bridges” seems eminently sensible to me. People arriving from locations with lower infection rates than the UK could help to improve the statistics and surely do not represent an increased risk.

This approach is making countries outside the UK question whether they should be allowing visitors from the UK, where supposedly, our situation is much worse still. I suspect that air bridges will be agreed and established in the next month or so.

On the almost forgotten subject of Brexit, we are now seeing some headlines about supposed progress in regard to fishing rights in UK territorial waters, but any proposed changes have already sparked comments from France that a blockade of Calais will be mounted as soon as any changes are announced and that is just for starters! We have so much to look forward to on this one!

Turning now to the financial world, over the last week we have seen all major markets gain ground as they continue to nudge upwards on the optimism driven by the reopening of various sectors of the economy, even though we are being constantly warned of major global recession. What irony that the one country bucking the recession trend is China who are now forecasting modest growth this year – this could set some of the conspiracy theorists off for sure!

I had a question the other day about how markets are different today, compared to more normal times and I will try to provide an answer as best I can. The very definition of “normal times” could spark a whole new debate, but I will take it in the context it was meant.

When we look at long term investment strategies, there are various asset classes that are considered which include Company shares, often referred to as Equities, Sovereign debt, like UK Gilts or US Treasuries, often referred to as Bonds. Thereafter we have property, commodities and a whole range of different assets to consider.

The main elements though are the Equities and Bonds as described above. The traditional or longer-term approach to investment (in more normal times), has relied on the relationship between these two asset classes, which historically have tended to move in opposite directions. When Equities are up, Bonds are down and when Bonds are up, Equities are down. This (over simplified) view means that the proportion held in either asset class can be increased or decreased to offset the impact of market values changing and thus help to manage downside risk. However, since recovery from the global meltdown in 2008, this pattern has changed, and the two sectors have followed a much closer path as the graph below demonstrates. 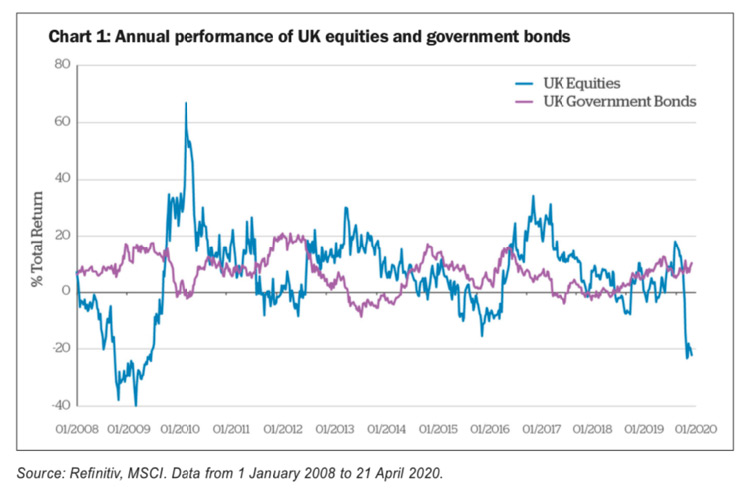 Whilst this looks at the UK only, a similar trend has followed globally, which is why Portfolio Managers have had to rethink their strategies and incorporate more alternative investments to help manage downside risk. This for example, is why the price of gold and other precious metals have continued to increase.

I hope that may be of some interest but, enough for now I think – we hope you and your family remain safe and we will keep in touch.

With best wishes and stay safe.