Whilst it is good to see the lockdown measures being relaxed around the world, we are starting to see some clear differences of opinion emerge, which will in turn, lead to further confusion, which is a shame, but I guess inevitable. For example, as Spain announces that they are planning to open their borders shortly, to enable them to salvage some of their Summer tourist season, and have further stated that they are specifically targeting visitors from the UK; the UK has in turn said that they will impose a 14 day quarantine period on people returning to the UK. Clearly, the average holiday maker will not be able to comply and so Spain’s efforts are likely to be thwarted, unless or until there is a change of policy in the UK. I personally think the UK will relax this requirement fairly quickly if the “Track & Trace” app they are launching is halfway successful. That may just come too late for the Summer season, but we shall see, and it may of course, prompt a mad dash for last minute deals if the rules are relaxed.

I think it is also slowly becoming clearer that there is unlikely to be a cure for Covid 19, but rather, we will learn better ways to deal with it and to minimise its impact and that multiple treatments are likely to emerge as various existing drugs are applied to Covid 19 cases and more data is collected. All of this takes time, but time is in itself illusive. It seems as though we have been in lockdown for a very long time but in reality we have just started week 10 so it is still relatively early days and there is a danger in assuming too quickly that we are over the peak of the problem and that everything improves from here.

I heard a comment on the radio earlier when someone offered the view that if a woman was running the UK right now, hairdressers would have been top of the list for reopening – we know our PM is not so worried about his hair!

You know my views on statistics and like many people, I am sceptical about anything published in the tabloids, but earlier this week, Chris showed me a chart that had been published in The Daily Mail, which I thought I would reproduce here as I also heard another news item stating that the UK had now overtaken Italy and Spain as having the highest death toll and that only the US had larger numbers. The chart below though talks about the numbers relative to the population and you will see this paints a rather different picture for both the UK and the US. It’s a shame that Spain was not included. 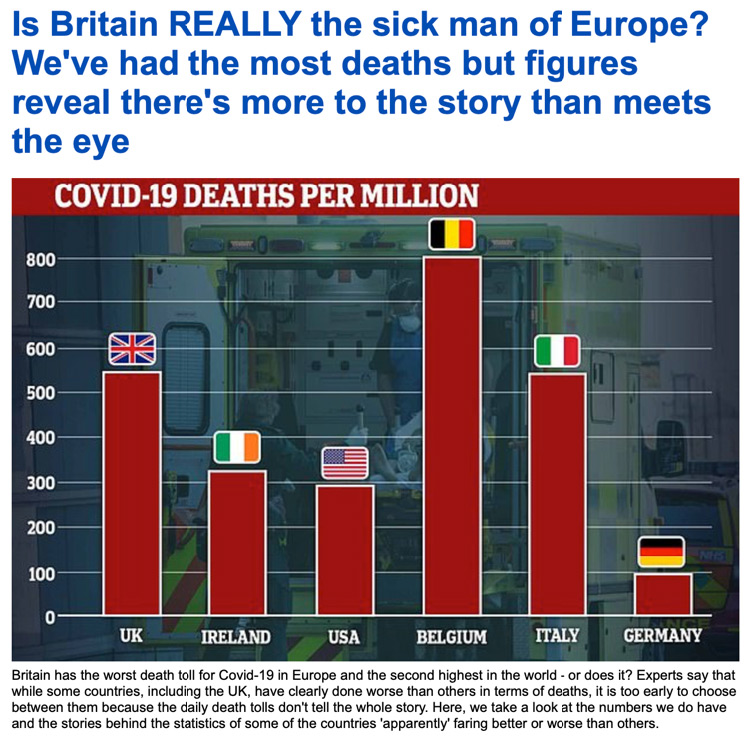 As you know, I keep in regular contact with fund managers who are at the “sharp end” of investment management and almost without exception, they remain cautious and concerned that there will be volatility and uncertainty in the world stock markets, and yet we see all of the main indices slowly climbing and some individual stocks, like Apple, achieving all-time record highs in share values. In fact, all of the FAANG stocks as they are referred to are doing well. (Facebook, Amazon, Apple, Netflix & Google).

Clearly these are in the minority but what this demonstrates, is that there will always be winners and losers, in any market conditions and it is the responsibility of the fund managers to search out quality Companies and funds, which will not only survive, but go on to thrive in the longer term.

As always we will keep in touch and I would be pleased to hear any views you may like to share.

With best wishes and stay safe.

Tel: 0203 167 0880
Email: info@abc-ifa.com
PRIVACY POLICY
If you wish to register a complaint, please write to us at the above address or email us as info@abc-ifa.com or telephone 0203 167 0880
A summary of our internal complaints handling procedures for the reasonable and prompt handling of complaints is available on request and if you cannot settle your complaint with us, you may be entitled to refer it to the Financial Ombudsman Service at www.financial-ombudsman.org.uk or by contacting them on 0800 0234 567
Existing ABC Direct clients please log in here.